The Thomas Nelson’s men’s basketball team has 10 games scheduled for the second half of the season. Coach Chris Moore’s goals are to win every one and place first in the New South Athletic Conference.

Those goals might seem out of reach until the Gators' performance in first half of the season is taken into account.

“This semester, we were able to beat Richard Bland two times, Apprentice School two times, Mid-Atlantic Christian University and the No. 12 team in the country,” Moore said.

The wins over Apprentice and Mid-Atlantic Christian are notable because both are four-year schools. The victories over Richard Bland are meaningful becau 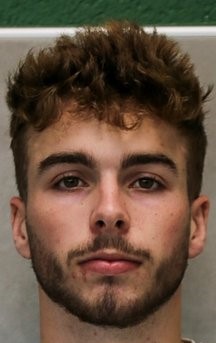 se the Statesmen play in a higher classification, Division as opposed to Division III, in the NJCAA than do the Gators.

And after defeating the 12th-ranked team in the country, Monroe Community College of New York (Bronx campus) on Dec. 19, the Gators are heading into the holiday break with an 8-1 record.

“Big win, big win," Moore said of the 86-71 home victory over Monroe. “We were able to come out of that one with a pretty easy win.”

First-year guard Kaiden Mines (right) led the way for the Gators, going 8 of 10 on 3-pointers for 24 points. Two days afterward, he was named the conference player of the week. Three other players, Javion Majette, Michael Cunningham (4 of 5 on 3-pointers) and Juwaun Brown, each had 12 points vs. Monroe. Brown added 10 rebounds, and Cunningham five.

The Gators bounced back after suffering their first loss of the season the day before, 90-71 to Sandhills Community College of North Carolina, the 10th-ranked NJCAA Division III team in the country.

Moore said the keys were trust and preparation.

Against Monroe, the Gators held a 34-30 lead at halftime before taking command with a 10-0 run early in the second half. Their lead grew to 26, and Moore was able to play everyone, and they all scored.

Against Sandhills, the Gators led 26-25 before the hosts took over. Javion Majette scored 13 points, twin brother Jaquan had 10, and Cunningham also scored 10. Fewer than 24 hours later, that loss was behind them.

The Gators are off until early January. Go to tncc.edu for the schedule. Home games are played in the Allen Iverson Gym at Bethel High School, 1067 Big Bethel Road, Hampton. General admission tickets are $8. The cost is $5 for faculty and staff with ID. Thomas Nelson students with ID, and children under 12 are free.